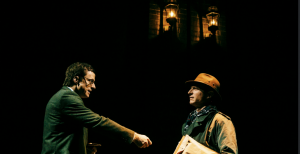 When it was time for the Geffen Playhouse in Los Angeles to mount their production of the drama ‘Mysterious Circumstances,’ which explores the death of the world’s foremost Sherlock Holmes expert — and includes Holmes himself — they turned to equipment from RC4 Wireless. “I have personally been working with RC4 products for 5 years now, but the theatre has been working with the gear much longer.  We actually have an RC4 Wireless Series 2 transceiver packed away,” notes Ramine Ameli, Lighting and Projection Supervisor.

‘Mysterious Circumstances’ was chock full of action. “There ended up being a scene change every three minutes or so. So, having lots of different set pieces that could move around freely without wires really established every location,” notes Ameli.

As for the plot, “The show revolved around a box of unpublished Sherlock Holmes manuscripts, so we had three identical boxes equipped with different gags. All three boxes used an RC4 Wireless DMX2dim. The first box appeared to be floating during pre-show, and as the show began, the keyhole light-up -LED tape in a mold- and the box appeared to get sucked into the keyhole. The second version of the box had a glowing keyhole but did not open up. This was to have the audience associate this box with the one they saw in the beginning. The third version of the box had LED tape inside it to light up someone’s face as they looked into it,’ Ameli explains.